Cecilia
Austin, Texas, United States
I'm a foodie and organic vegetable gardener and decided to give this blog thing a whirl. 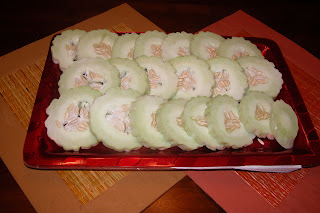 Last week I harvested a behemoth Armenian cucumber from my garden. Because I didn't trellis my cucumbers, it was able to grow unnoticed for who knows how long to reach 21 inches long and four and a quarter pounds, before I finally caught sight of it glistening under the foliage as I watered.

It's been a week since harvesting this giant vegetable. I hadn't cut into it because it was so beautiful, and I wanted to admire it. But this morning, I decided it was time. And so I cut it down the middle and removed a thick slice and took a bite.

It was delicious and refreshing and delightfully crisp. I found the skin a little tough--because summer does that to the skins of produce--but not so tough as to make it unpleasant to consume. It's, as you might imagine, seedy. However, those are easily removed.

I'm thrilled that the cucumber is edible, and will bring it to work to snack on all day, drizzled in olive oil, balsamic vinegar, smoked sea salt and cracked black pepper.

I'm glad also because I harvested its little brother yesterday. That cucumber is over three pounds and about 18 inches long. From that one, I will make a refreshing cold Summer soup.

Serve chilled, topped with dollop of yogurt or sour cream and garnish with chives.

NOTE: This soup can have a slightly grainy texture because of the cucumber. If this is unpleasant to you, simply strain the soup before serving.

A Garden of Memories

This morning while watering the garden, I saw something glistening beneath the leaves of the sprawling cucumber vines, which are not trellised. After I was done watering the garden, I went around to the various beds to harvest ripe tomatoes, peppers, okra and herbs. When I got to the cucumber vines and dug below the tangle of vegetation, I pulled up a behemoth Armenian cucumber, which is pictured above (21-inches long and four and a quarter pounds).
That cucumber reminded me of my mother's garden.

Growing up, my mother always had a small, but very productive, vegetable garden in the backyard. At the time, I didn't realize it wasn't a hobby.

There were seven kids in my family and keeping us in groceries on the modest income my father brought home as a warehouse supervisor was a challenge--but one my mother met with grit, determination and compost.

On the kitchen counter next to the sink was a compost bowl, but I don't think that's what she called it. My mother insisted that all scraps from cooking or from our plates (not that there were many of those), should be diverted from the trash and instead go into that bowl. Each morning, she would go to the back of the yard and actually bury these bits in the soil around the plants.

She cultivated a raised bed garden that was less than fifty square feet, but the bounty that came from it was phenomenal. And large. Especially the zucchini. The zucchini that came from my mother's garden were as big as full-term newborn babies. They were often twenty inches long and about six to eight inches in diameter--and heavy. She would cut them into thick disks, dip them into batter and quickly fry them. With salt and pepper, they were delicious. Or she would cut them into chunks and add them to other dishes. To me, that's what a zucchini was supposed to look like.

Imagine my surprise when I began my life as an adult and went to the grocery store the first time and discovered zucchini the size of bread sticks. At first I felt ripped off, but later learned that they are "best" harvested at a more diminutive size than the zucchini of my youth.

I've grown a lot of zucchini since becoming a vegetable gardener, and have usually harvested them when they were "just right." Every now and again I have missed one or two, and they have grown large, but never as large as what came from my mother's garden.

Yet, today's harvest of that amazing cucumber brought me back to my childhood and my mother's garden. While we never had much in the way of material possessions, my mother made certain that we always ate well. And that meant eating from the garden.

If you want tomatoes that set and bear fruit in Texas' summer heat (at this writing we are expecting yet another triple-digit day), you can hardly go wrong with cherry or grape tomatoes.

In my garden the Juliet (Lycopersicon lycopersicum), which is somewhere in size between a grape and plum tomato, is a real champ. I even put the plant into the ground toward the end of April, which is terribly late for Central Texas, and it is still prolific (as you can see in the picture).
While I like to grow heirloom tomatoes, I also like to keep hybrids like Juliet in the mix, for dependable production. This tomato is not sweet like cherry tomatoes and not as juicy as grape tomatoes. In form, texture and taste, it reminds me more of an Italian plum tomato.

I've been picking them before they are fully ripe, but with a heavy blush, trying to beat the mockingbirds. They ripen nicely on the kitchen counter in a day or two.
They're great as snacks, in salads and salsas.
Posted by Cecilia at 8:21 AM No comments: 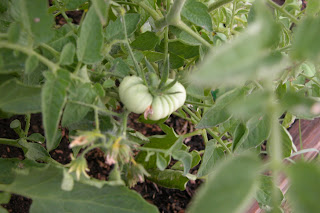 When the economy started to plummet out of control in late 2008, Americans from coast-to-coast hurried to garden centers and home improvement stores where they snapped up vegetable seeds and plants faster than politicians take bribes. Citizens may have lost half their retirement incomes, but doggone it, they would not go hungry if they had any say in the matter.

This past spring, local independent garden retailers like The Natural Gardener, 512-288-6113, and The Great Outdoors, 512-448-2992, saw large spikes in sales of vegetable plants, seeds, bulk soils, compost and miscellaneous gardening accessories over the previous spring’s receipts. The majority of these customers, they discovered, were first time vegetable gardeners.

Do these new backyard farmers save money by cultivating food crops? It is certainly possible, especially if they grow things like heirloom tomatoes that sell for between $3.00 and $6.00 a pound at Whole Foods and Central Market. Vegetable growers will definitely save time and fuel costs by harvesting greens, tomatoes, peppers, herbs and more from their gardens instead of spending time on congested roadways and in grocery store checkout lines. If those food plots of theirs are highly productive, these folks will no doubt have fresh, delicious produce to preserve for future use.

At this writing, the economy is supposedly no longer in free fall; there are those who say the worst is over and that things are beginning to look up. Yet, even as the economic outlook improves, don’t expect this new crop of vegetable gardeners to let their rows lie fallow. This dark time in our nation’s history has shined a light on something that none of us knew we missed until we found it—a personal ongoing connection with the food we eat. And that’s something that never loses value.
Posted by Cecilia at 6:51 AM No comments: 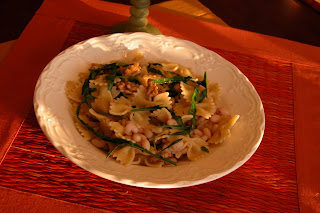 I used the wild arugula (Rucola selvatica ) growing in my garden in a recipe that I made for tonight's dinner.

The smell of the arugula when I picked it was intoxicating, and more intoxicating still was the aroma of the herb when I heated it in the pan with garlic and butter.

I was just cooking for one tonight, so I offer measurements for the solo cook/diner.

This makes a hearty and satisfying serving for one.
Posted by Cecilia at 8:33 PM No comments: 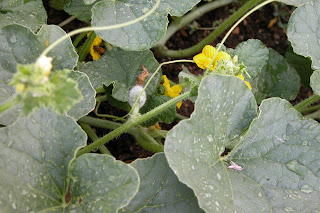 I'm not going to lie to you--it always feels like a huge chore to get up in the mornings to water the garden, especially when soaker hoses are not that expensive and would save me a lot of time and fire ant bites.

My soaker hose and drip system gardening pals think I am behind the times, and I wonder about that myself. But the moment I open the garage door to go outside, and feel the cool morning air on my skin, I forget about the "inconvenience" because morning is like that.

I love that I get to witness the magic of the garden. Today, I caught sight of my first baby cantaloupe. It was out in the open, minding its own business, looking as cute as could be. Of course I immediately began to worry--as any new mother would--about whether I could give it what it needed and protect it from harm. I'll do my best. 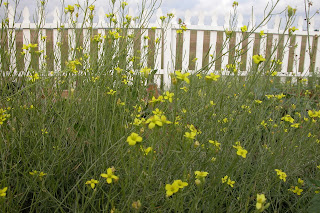 It seems I am on the same morning schedule as the bees. At first I would only see one or two, but since my wild arugula started to bloom with a mutitude of delicate yellow flowers, I see many more. I do my best to avoid wetting the flowers, as not to "dampen" the important work of these hard-working bees.

I harvested some of the leaves of the arugula plant--and the smell was intoxicating--and will use them in a dish I plan to make for dinner tonight: pasta, white beans wild arugula and walnuts.

The light in the morning is welcome; it is soft and casts gentle shadows. I feel at peace in the morning, with the sound of birds, wind, and running water. Watering my garden by hand in the early morning is easy and quiet and not something I plan to give up any time soon.
Posted by Cecilia at 8:23 AM No comments: 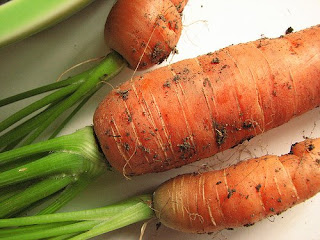 Coarse and hairy with a woody core is an apt description of one of my exes. Interestingly, it also describes carrots that have spent their formative days in soil with too much nitrogen in it.

You'll notice the carrots in the photo have small-ish hairs on them, meaning the soil from whence they came was relatively well-balanced. Now, if you really want to see carrots gone wild, check out these hirsute roots.

Would you want to eat a carrot that looks like it's wearing a moth-eaten fur coat? Neither would I. Even when you peel away the pelt, you still have to deal with the unpleasant corky texture of the vegetable. No amount of cooking will save it--unless it is being cooked in a compost pile.

Proper growing conditions and nutrition will prevent your carrots from getting all hairy and forked up (poor nutrition also causes roots to fork and do other odd things).

Carrots grow best in cooler temperatures (55 to 70-degrees Fahrenheit), in deep, loose, well-draining, and lightly alkaline soil; seeds should be planted 1/4-inch deep. They like more water than you might think, and take it personally if you're stingy with the wet stuff.

Give them a fertilizer that has twice as much phosphorous and potassium as it does nitrogen, such as a 5-10-10. Give them a dose of fertilizer at the time of seeding, and again when the tops are about three to four inches tall. And start harvesting when they are about the width of your finger--of course that will vary with hand size, so use your best judgement.

If all goes well, you will have plenty of carrots to use in your favorite recipes. What? You don't have any favorite carrot recipes? Well,then, here are a few of mine from epicurious.com: